This is another of the Museum’s projects which had its beginnings in the period  during which the fiftieth year since District Six was declared a White Group Area on 11 February in 1966, was commemorated. It thus started in February 2016.  The project is also linked to the campaign to have District Six declared a National Heritage Site (NHS).

An installation of suitcases entitled Remembering 60 000 Forced Goodbyes was added to the permanent exhibition in the Museum. Primarily, the suitcase motif formed the aesthetic framework which drove the visual elements of the campaign. The suitcases themselves have become important marketing and communication tools to foster awareness and have also become an educational platform for ongoing story-telling, creative workshops and intergenerational exchange with youth.

A number of ex-residents’ life stories were translated into suitcase representations, using their stories and personal memorabilia to narrate their life experiences in District Six.

Some of the initial contributors were: Noor Ebrahim who lived at 247 Caledon Street and who recalled his grandfather owning a ginger beer business named ‘Peerbhai Ginger Beer’; Ruth Jeftha whose family shared a communal house at 35 Stone Street, and Nomvuyo Ngcelwane whose family lived in one bedroom at 22 Cross Street and who were forcibly removed in 1963.

The suitcase is used as a metaphor for what former residents carried with them on their traumatic journeys away from their family homes. The contents of each suitcase in this project provides  visitors with a glimpse into some of the bits and pieces that they might have packed into their suitcases.

To support the NHS campaign, luggage tags were designed as pledge forms, and all who enter the Museum were invited to pledge their support for the campaign. The tags have been strung up ‘strikkie-style’ from the Museum rafters, adding contemporary voices into the exhibition.

Alongside this component of the project, other aspects have evolved into ongoing intergenerational interventions. One of these is the ‘Tell Your Story to a Born-free’ project which birthed several creative workshops and a space for training storytellers. Over the last year it has grown into a travelling exhibition and has since included more ex-residents stories: Susan Lewis, Faranaaz Gilfelleon, Mogamat Benjamin and Jasmina Salie whose suitcase stories have gone to various libraries:  Crossroads, Langa, Manenberg Hanover Park,  Nyanga and Gugulethu.

(All projects and programmes of the District Six Museum are structured inter-departmentally,  with a lead department being assigned to each. The Suitcase Project is a project of the Education Department and is co-ordinated Mandy Sanger.) 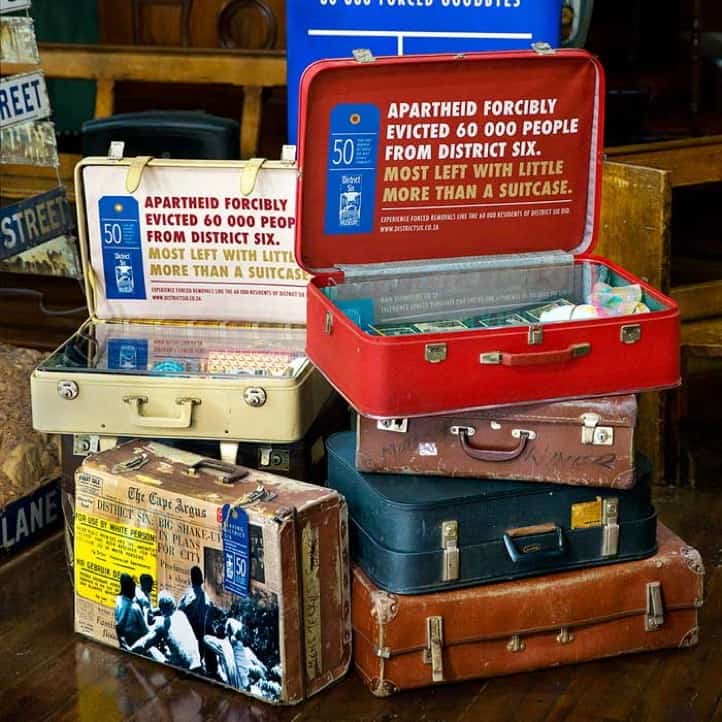 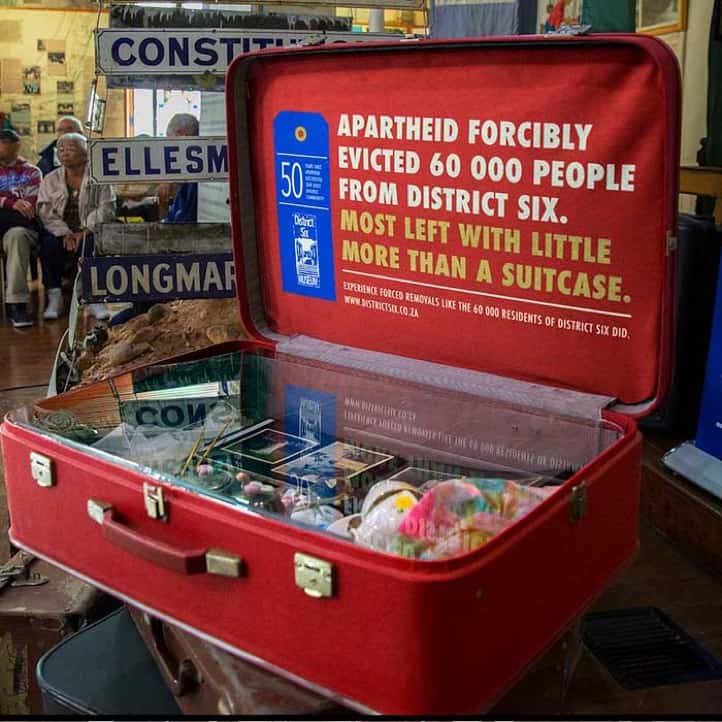 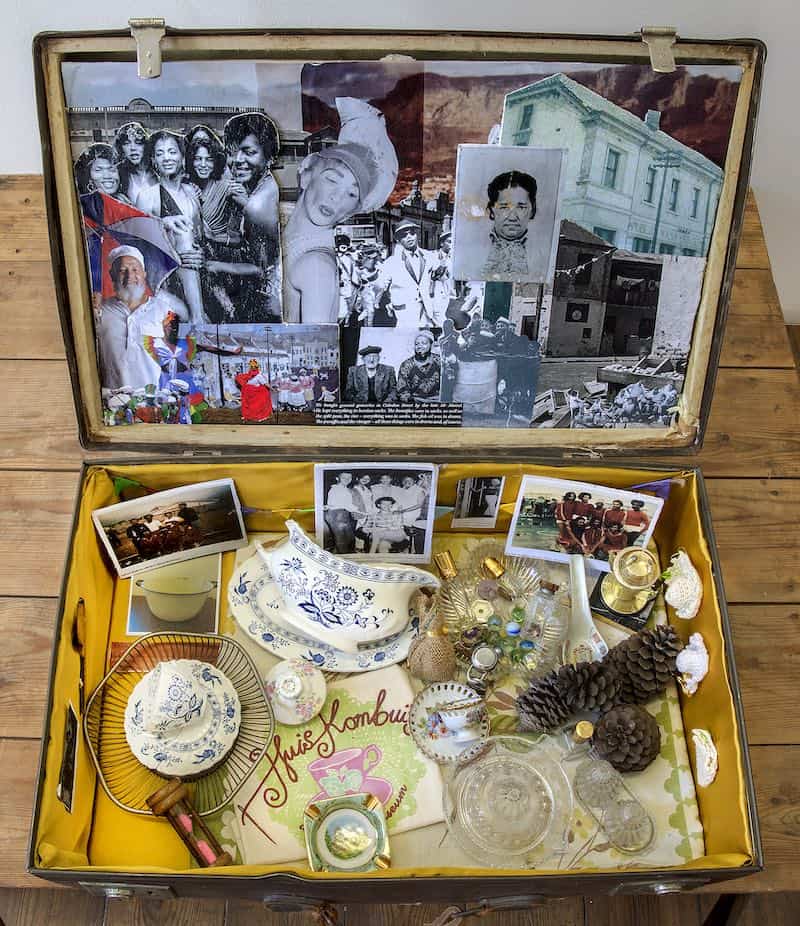 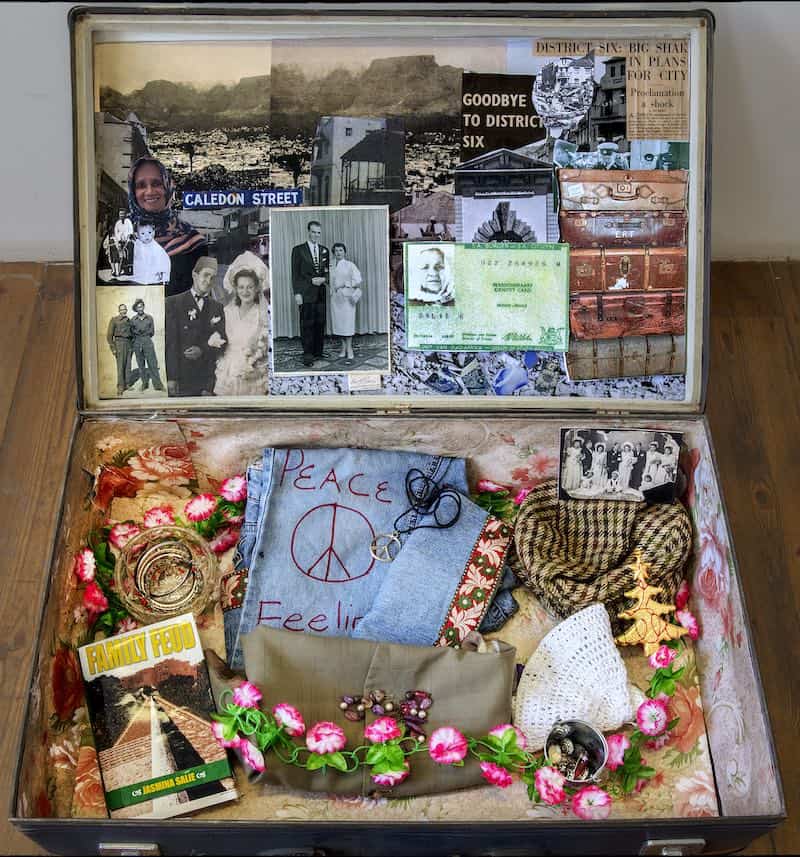